Dr Frances Dipper is an author, lecturer and independent marine consultant and has spent a lifetime happily observing and studying marine organisms the world over.  A naturalist at heart, she has always loved the sea and has a passion for writing books about the ocean both for adults and for children. This has culminated recently in her major work ‘The Marine World: A Natural History of Ocean Life’. Her Dorling Kindersley children’s book, ‘Guide to the Oceans’ won the Royal Society Aventis Prize for junior Science Books in 2003.

Although interested in anything that swims, slithers, glides, flaps or simply sways under water, she has a particular love of fishes and as well as writing books about them, she runs marine fish identification courses for marine consultancies and for Seasearch, a recording project for volunteer sports divers. She is happiest sitting on the seabed watching the marine world go by and testing the patience of her diving buddies.

Use this website to see and order her books, get in touch to arrange a talk for your local group or school. 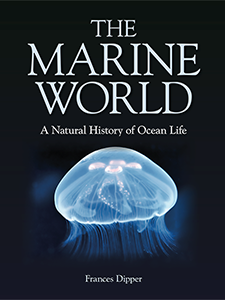 The Marine World: A Natural History of Ocean Life

Illustrated by Marc Dando
Out Now!

If you love books about the ocean and its inhabitants then try this, the product of a lifetime spent by Frances Dipper happily observing and studying marine organisms the world over. It has been brought to colourful life by a myriad of enthusiastic underwater photographers and by Marc Dando, the renowned natural history illustrator. This book is for the inquisitive: for the naturalist on, in and around the ocean, for the student who needs more detail, for the scientist wanting background knowledge, for the diver exploring what he is seeing, for the fisherman’s finds, for parents to answer “what’s this, mum?”, for anyone who loves the ocean.

The Marine World is an immense, three-dimensional living space inhabited by marine life that varies from the mundane to the bizarre. Its salty influence extends up river estuaries, over seashores and inland with brine-laden spray. This book covers all those organisms that live in, on and around the ocean bringing together in a single text everything from the miniscule to the immense. With sections on all the major groups of marine invertebrates, plus plants, fungi and bacteria as well as fish, reptiles, mammals and birds, it provides an insight into the existence and way of life or almost everything living in the ocean. Each animal or plant is found in its own particular place and the book encompasses principal ocean habitats and ecosystems including open water, seashores, deepsea, coral reefs and many more. Written with clear, accessible text and illustrated throughout with photographs and detailed drawings, this book provides in depth information to provide answers for each group on ‘what?’ ‘where?’ and ‘how?’, via sections on identification, distribution, structure, biology, classification and conservation.

Available to purchase from the Wild Nature Press website 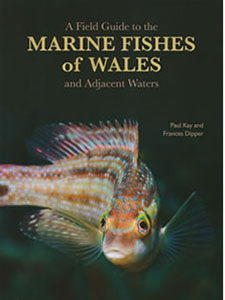 By Paul Kay and Frances Dipper

Published by Marine Wildlife in 2009

“This is the most comprehensive guide to marine fish in Britain and is an invaluable tool for ten-year-old rock poolers, fishermen, naturalists and divers alike.” Iolo Williams, naturalist and television presenter.

This book aims to provide the reader with a comprehensive identification guide to all the marine fish you might see as a diver, snorkeler, angler, fisherman, rock-pooler or even beachcomber. Although focused on Wales, the fish do not recognise such boundaries and the guide includes the waters all round Great Britain and Ireland as all the species featured also occur in these areas, with the exception of some southern and rare visiting fish. The book covers over 250 species with key identification features and supporting underwater photographs and illustrations. Accounts also cover behaviour, habitat, distribution, natural history and sightings. The book introduction describes how to identify, record and photograph fish and a complete list of UK and Irish marine fishes is included in the appendices.

The photographer, Paul Kay, has been diving and taking underwater photographs around Britain and Ireland for 25 years.

Available at £12.50 from the Marine Conservation Society.

Signed copies also available direct from Frances Dipper; please get in touch to request this

This is Frances Dipper’s iconic field guide to the common sea fishes of Britain and Ireland, first published in 1987. Whilst the photographs are pre-digital, each is large and clear and accompanied by a detailed drawing of the species pointing out key identification features. The species are arranged, not in taxonomic order, but in four sections according to where they are usually found in the wild (soft seabed, hard seabed, open water, rarely seen fish). A particularly useful feature is the black thumbnail outlines of key groups of fishes (e.g. flatfish, gobies) along with a general description. This allows the reader to find out fast just what sort of fish they are trying to identify. Over 100 species are described in detail.

Frances has written or co-authored many other books listed below and has acted as marine consultant on many more. Many of these are still available online new and secondhand through sources such as Amazon and ABEbooks.

Frances Dipper was a major contributor to the Ocean Life section of this stunning book. The other three sections are Introduction (overview of physical and chemical features), Ocean Environments and Atlas of the Oceans.

Also available from Waterstones and other good bookshops.

By R V Tait and F A Dipper
Published by Butterworth-Heinemann. An imprint of Elsevier Science in 1998 (Fourth Edition)

This book has been a popular introduction to marine biology for undergraduates since it was first published in 1968. Initially written by R V Tait, Frances Dipper revised, re-wrote and expanded the text and published the fourth edition with him in 1998. Although now outdated, the text still contains much useful information presented in a clear and readable form. Still in print and available as a paperback or e-book from the Elsevier online store